There are many "old homesteads" in my family history, but none in North America older than the Fairbanks Homestead of my 9X great grandparents Jonathan Fairbanks and his wife Grace Smith. Fairbanks House in Dedham, MA (just outside Boston) is an American National Historic Landmark and listed on the National List of Historic Places.  Built in about 1637-1641, it is thought to be the oldest standing timber structure in North America. Some say it is also one of the most haunted houses in America!

Jonathan and Grace came from near Halifax, West Riding, Yorkshire. Jonathan was born about 1595 to George Fairbanks and his wife Mary Farrar.

Jonathan and Grace were married at Halifax on 20 May 1617 and had a family of six children all born in England, including my 8X great grandfather Jonas Fairbanks born there 6 March 1624. Jonathan was a wool merchant and appears to have been an educated middle-class man.

The family name has been spelled a variety of ways: Fayerbanke, ffairbanke, Fairbanck, Fairbanke, Fairbank and Fairbanks (and probably numerous other variations). Most often in the early days in New England it was spelled Fayerbank or Fairbank.

Jonathan and Grace packed up their children and headed to America some time between 1633 and 1636. There are differing views on the year of their arrival and ship's name. It is said that they arrived in the Boston area of New England with a ship's timber (for the main beam in his house), English oak, furniture, china and linens, tiles and windows. It was clear that Jonathan had plans and the wherewithal to build his family a comfortable home in the new world. Why they chose to make this trip after setting up their family in Yorkshire is more difficult to comprehend. Although the move may have been motivated by the desire for freedom of religious expression, it might have been a sense of adventure and a desire to start afresh in a challenging new land.

The town of Dedham was established in the summer of 1636 with the Dedham Covenant, essentially an agreement among the 22 subscribers as to future management of the town. (This was a new land and the immigrants were cognizant of the importance of establishing a basic framework for how their society would be run.) It appears that Jonathan arrived a bit later and was accepted and subscribed his name to the Dedham Covenant at the time of the First Assembly held there on 23 March 1637. (His sons would sign later when they came of age.)  Jonathan had been granted at least 12 acres of land including some swamp land upon his arrival and records over the years show additions to his land holdings.

As there were no roads when the Fairbanks family arrived, they undoubtedly came up the Charles River with all the supplies for their new home. The original house had four rooms: a kitchen, parlour and two bed chambers on the second story. There was a massive chimney with over 40,000 bricks (said to have come from England as ballast) held together with clay from the Charles River. Low ceilings helped keep the house warm; although we think of these ceilings as too low for comfort, the average height of men in those days was about 5 ft 1 inch - 5 ft 5 inches tall and women about five inches shorter. The roof was originally thatched in the English tradition. Many additions were made over the years and the number of rooms increased to 12.

One interesting record indicates that Jonathan (at least for awhile!) had a mind of his own when it came to religion. Plymouth Colony was an extremely religious settlement and settlers were expected to follow the accepted Puritan religion. The books of the Dedham First Church contain this record (quoted from page 12 of "The Fairbanks Family in America"):


"Jonathan Fairebanke notwithstanding he had long stood off from' ye church upon some scruples about publike p'fession of faith & ye covenant yet after divers loving conferences with him; he made such a declaration of his faith & conv'sion to god & p'fession of subjection to ye ordinances of Xt in this X yt he was readily & gladly received by ye whole church: 14d 6m 1646."

One can only assume that life in the community was more harmonious for Jonathan after this public conversion.


He executed his will on 4 June 1668 and died later that year, leaving his entire movable estate (personal property) to his wife Grace. Based on some of the items listed in his will, it is likely that Jonathan was a wood turner. Small bequests were made to several children and grandchildren with the house and lands being bequeathed to his eldest son John in accordance with the usual English practice of primogeniture.

Subsequent History of the Fairbanks Homestead

The house was continuously owned and occupied by members of the Fairbanks family for most of its existence. The last of the family tenants was Rebecca Fairbanks who was living in the house when it was struck by lightning and considerably damaged. (There are two different dates given for this occurrence - 1892 or 1902.) Rebecca escaped with a severe shock but her dog had been lying under her bed and was killed. Rebecca moved into Boston as a result and for the first time the house was occupied by someone else but a few months later Rebecca once more moved back in to the old family homestead. A fund for the preservation of the house was established in 1897 and at that time, an article in the local "Transcript" newspaper said that Rebecca had been forced to sell the house out of the family two years earlier. Once the funds were provided, she was permitted to live in the house again. Today the house is owned and operated by The Fairbanks Family in America, a non-profit member-based group to which I belonged for a period of time. The charming old house is probably in very safe hands with this huge and dedicated group of descendants of Jonathan and Grace who claim this as their ancestral homestead. 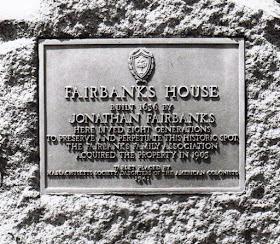