Sarah Catherine (Bullen) Wescott was my great great grandmother and another link in the chain of mitochondrial DNA passed down my maternal line. She is not central to my favourite photo but I like this picture so much because of the unusual posing of the family group.

In the above photo, Sarah Catherine is in the centre of the group on the right with some of her daughters-in-law and grandchildren. The photo was obviously intended as a posed photograph of her children who are arranged more formally on the left side of the photo. I always find it a bit strange but also rather charming. The photographer couldn't leave out half the group even though they weren't posed with the others. What it says about the family dynamic could be the subject of much speculation.
There is someone obviously missing from this photograph: the patriarch of the family. Sarah's husband George Garner Wescott was quite possibly the photographer of this picture. March 2020 Update: I no longer believe that George is missing from this photograph nor that he was the photographer. A closer inspection reveals a man on the far left in the background of the picture who appears to be a man of about the right age and appearance to be George Garner Wescott. I am tentatively identifying him as such.

Sarah Catherine was the daughter of Jane Murdy and David Bullen; her father David was the son of John Bullen. She was born 1 September 1838 in Clinton, New York but the family soon moved to Kenosha, Wisconsin. Sarah's uncle John Bullen had been instrumental in opening the area to settlement. Shortly before her 21st birthday she married George Garner Wescott on 23 July 1859 in Trenton, Washington County, Wisconsin.


The couple had eight children born between 1860 and 1875.  George served as a private in the American Civil War in Company D, 12th Regiment, Wisconsin Volunteer Infantry. At the time of his enlistment, he was described as 27 years old, 5 feet 5 inches tall, dark complexion, black hair and blue eyes. (We don't know how tall Sarah was or what colour her eyes were.) Although George's health suffered as a result of his war experience, I am very grateful that he survived the Civil War since I descend from his daughter Mary-Jane ("Mayme") who was born about 5 years after his discharge from the army.


The family was a musical family, playing for many local dances. Father George conducted a singing school as well as being a carpenter and farmer.

After George died in 1916, Sarah received a widow's pension for his service in the Civil War which was increased to $50 per month in 1926. Bureaucracy was obviously as frustrating to deal with then as now. See the note below that Sarah wrote asking what the Pension Bureau expected her to do to meet the requirements for qualifying for that pension increase. 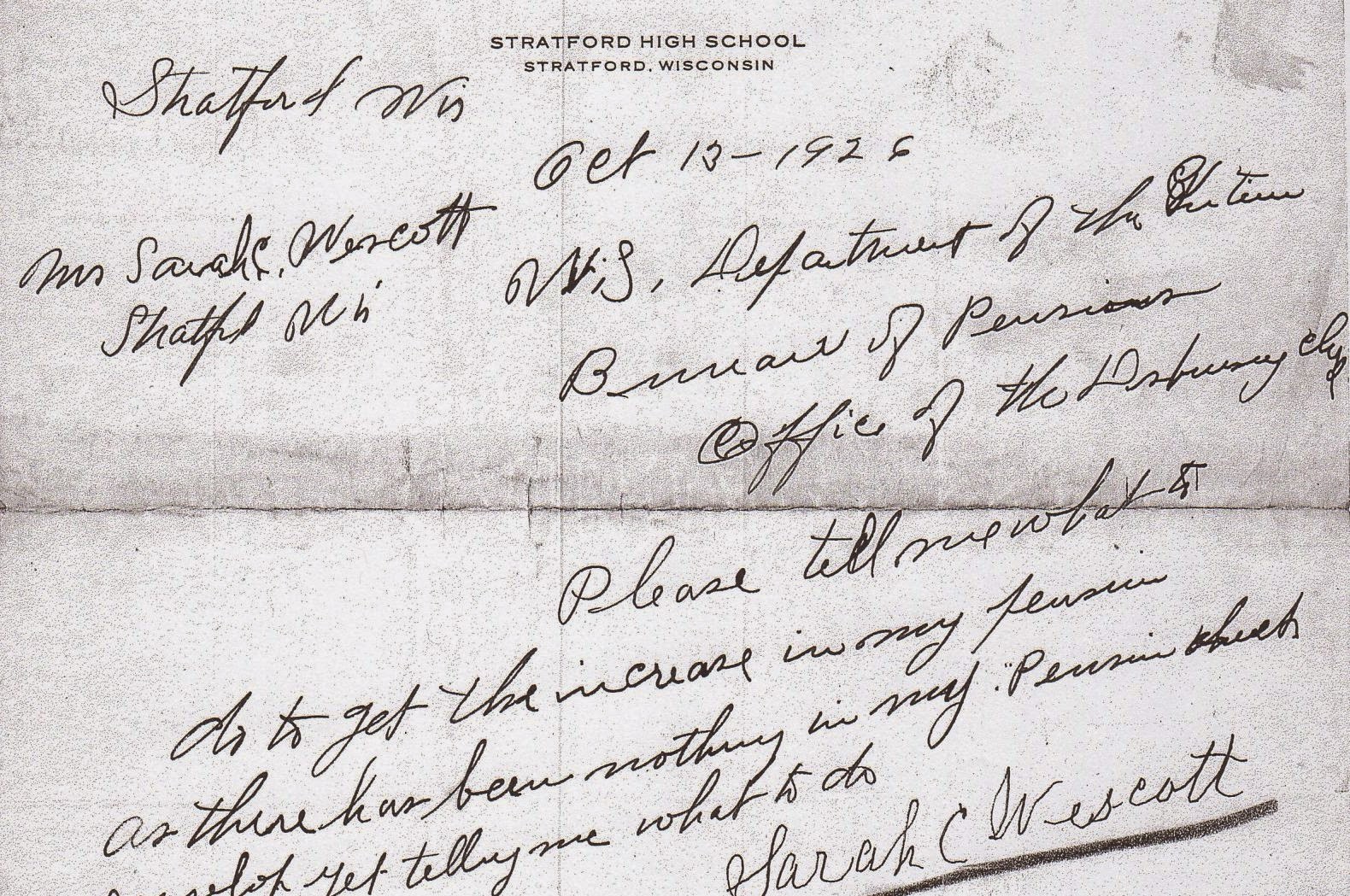 At the time of the 1930 US census, she was living with son George Wescott and daughter-in-law Anna in Marathon, Wisconsin. Sarah was 91 years old by then.


She died on 5 January 1933. Her obituary indicated that she died at age 94 after just two days' illness and that she had been active all her life. She is buried beside her husband George in Colby Memorial Cemetery, Colby, Wisconsin.