Having already written about two ancestors who fought for American independence (see John Bullen and Henry Vought stories), this week's suggested theme of "Independence" will be largely ignored as I strike off on my own independent path. My 8X great grandfather Jonas Fairbanks also showed an independent streak.

Jonas was the third son of immigrants Jonathan Fairbanks and his wife Grace Smith. He was born early in 1625 and baptised at Halifax, Yorkshire, England on 06 March 1625. His early years were probably comfortable ones with his father a reasonably well-off wool merchant. Most likely his parents were religious dissidents and that may well have been the cause of their move to New England when Jonas was still a boy.

Growing up in the Fairbanks House at Dedham, Massachusetts, must have been quite a happy time for Jonas and his 7 siblings. This was a new town and there would have been many other children with whom to play. No doubt the education that he had started to receive in England would have been continued in the new land and he would have received as good an education as was available in Dedham at the time. A church and a school were always established along with the settlement of all these New England towns.


One of the stories that I cherish about Jonas involves his running afoul of the sumptuary laws when he was about 22 years old. Although he was making his way as both a carpenter and a farmer, he was fined a few shillings for wearing great boots before his estate amounted to more than 200 pounds. I love the image of young Jonas strutting about Dedham in his great boots! Apparently he got off without paying the fine because the law wasn't actually in effect at the time he was seen wearing the boots. (Presumably he hid them away in Fairbanks House until his estate was large enough to permit him to legally wear them again.)

By the time Jonas entered manhood and planned to start his own life with his own family, most of the lands around Dedham had been claimed and there was a push for expansion farther into the wilderness. Jonas moved to western Massachusetts as one of the original settlers of Lancaster in 1657. It has been said that he was a strong man, both in his mental and physical abilities.

He subscribed to the Lancaster town laws and orders on the 7th day of the 2nd month of 1658/59. Shortly after arriving in Lancaster, Jonas married Lydia Prescott who had moved there with her parents John Prescott and Mary Platts. Lydia had been born in Watertown, MA on 15 August 1641 and would have been just under 17 years of age when she married Jonas on 28 May 1658. Jonas would have been 23. This was the first marriage to occur in Lancaster. The young couple would go on to have numerous children including Mary, Joshua, Grace (my 7X great grandmother, born 15 November 1663 in Dedham), Jonathan, Hazadiah, Jabez and Jonas Jr.

The westward migration of settlers had not gone unnoticed by the native population. At first friendly and welcoming, they must have become concerned when it became apparent that the newcomers were expanding their communities farther into traditional Wampanoag territory. In 1675, when three American Indians were hanged in Plymouth Colony for the murder of a Christian member of his Wampanoag tribe, Chief Metacom (more commonly known by his English name King Philip) launched assaults on more than half the towns in New England. This went on until 1678 and is generally called "King Philip's War". Considering the population at the time, it could well be considered the deadliest war during the European settlement of North America. The colonial population was decimated with about 10% of the men killed, a dozen towns destroyed, crops ruined, the economy left in tatters.

Jonas Fairbanks was a victim of the Indian massacre at Lancaster of 10 February 1676 along with his 15 year-old son Joshua. It is not known where they are buried, but many of the Fairbanks and Prescott family members are buried in the beautifully mysterious Old Burying Ground at Lancaster, Massachusetts. 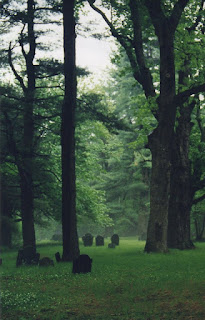