Louise Nelson was my paternal grandmother and the wife of John Bardahl whose story was told a few weeks ago in the 52 Ancestors challenge. My siblings and I called  her Grandma B. She survived John by 40 years to die at the age of 103. She and John had homesteaded together in the new community near Leinan and Stewart Valley, Saskatchewan, Canada. This is the community and the farm where I grew up. The house where I spent the first decade of my life had been Grandma B's house first so she is my "close to home" ancestor.

After their marriage in 1906, John and Louise made their first home together in Skogmo, North Dakota, but moved to the new Province of Saskatchewan in 1909 to homestead north of Swift Current in a predominantly Norwegian-speaking community. Several of Louise's siblings homesteaded in the same area: brother Nels and sisters Selma Nelson and Josephine Nelson with their husbands. Another sister Laura had married John's brother Steve and homesteaded a few miles away in the community. (All of the siblings except for Louise and unmarried brother Nels moved off their homestead farms within the decade.)

Louise and John were very active in community life and, in particular, in the building of Bethel Church just north of their homestead. Louise was a charter member of the Bethel Ladies' Aid and was the last survivor of the original charter. It was the Ladies' Aid that put on bake sales, fowl suppers and craft sales to assemble the necessary funding to enable building the church.

As with other homesteading wives, Louise was kept busy with all of the domestic duties without the modern conveniences that we take for granted. I recall my mother using the old wringer washing machine that had no doubt belonged to her mother-in-law before her. There was no running water in the house, so water had to be hauled in by buckets from the well and then heated in a large boiler on top of the wood stove. A long solidly constructed clothesline outside the front door had been given to Grandma B in exchange for her having provided meals for the crew installing the telephone lines in the area in 1917. In the bitterly cold winters, any laundry hung outside on the line would freeze into rigid slabs so the laundry was often put to dry indoors. Ironing was a major event using sad irons that were heated on the cookstove. This family of 10 lived in a 2 bedroom home with just kitchen and living room. Where they all slept I cannot imagine; there were just 5 of us when we lived there and all three of us kids shared a bedroom. There was no indoor bathroom. A trip to the outhouse was required summer and winter and baths were weekly affairs using shared water in a galvanized tub set up to take advantage of the warmth of the stove in the kitchen. Yet the family always looked clean and well turned out, something that must have required a good deal of effort on the part of Grandma B.

No store-bought baking for this family - all the breads, cakes and pies were made from scratch at home. The separate pantry off the kitchen was very charming but not very large for assembling all the great food that must have come out of it. Feeding hungry threshing crews during harvest required constant cooking, baking and cleaning up. There was a large bin for flour in the pantry - I believe it held a full 100 pound bag of flour and no doubt still emptied frequently.

I always enjoyed it when Grandma B would come to visit us. She had moved to Vancouver with her husband John to retire not long before  his 1945 death and I think she always missed the farm.  When she came, she would take lids from tin cans and nail them over any knotholes showing up in the chicken coop or any other building. She would sit and darn socks very patiently and always seemed to be busy. I think she found great comfort in just being in her old home. Although I always thought of her as a very serious woman, she had a really wild sense of humour that would often get her bubbling with laughter.

Visiting Grandma B always meant lots of food, and my siblings and I used to love her packed lunches that she would send our family off with for our return trip from her home in Calgary, Alberta, to the farm in Saskatchewan. We never made it past the outskirts of Calgary before begging to be allowed to get into the sandwiches and cookies and fruit that she had packed for us. Another fond memory is of the huge cardboard box full of Christmas presents and treats that she would send each year. (No doubt she sent similar packages to all 8 of her children and their growing families and it boggles the mind to think of the logistics of it all!). She always used so much tape and string that there was no hope of any of the packaging coming apart to show off the contents before Christmas.

Although the family was generally a very close and loving one, there was one unfortunate period in 1959 when elder son James decided he wanted to take over farming the homestead land. Louise still held title and had been renting it to my Dad who was her younger son. It must have been a difficult decision for her to make, but no doubt she felt she was doing the right thing in helping James get on his feet. We were forced to leave our home, resulting in some ill-feelings. That summer we weren't on the best of terms with Grandma B who was back on her homestead keeping house for son James. I remember sneaking over there after church one day to visit her; she fed me a cheese sandwich made with store-bought white bread, something I had rarely tasted.

Predictably, the farming career of son James did not last the year and Ken bought the land from Louise, forestalling any future issues. Warm family relations returned. But we never did move back to that house.

We did still have our garden there, though, and on one of her visits, Grandma B followed me into the barn after we had done some gardening. Wearing her customary dress and laced up Granny boots, she made me promise not to tell anyone that she was going up into the hayloft in the barn. This was not up a staircase, but a ladder built into the studs in the wall. She was over 80 years old at the time and climbed up there like she'd been doing it all her life! (I did keep her secret until after her death, but I do love to tell the story now because it says so much about her.)
When I was in my twenties, I once again had Grandma B close to home. She had been living in Calgary, Alberta, for decades and we moved to the same city for my husband's work. It was lovely to be able to visit her again and have my children get to know her.

She was in good health for most of the first century of her life. She lived on her own until she was about 100, but eventually time took its toll and she was in an auxilliary hospital at the end. She died on 16 February 1985 at the age of 103 in Calgary and was laid to rest next to her husband at Ocean View Burial Park in Vancouver, British Columbia. After 40 years apart, John and Louise were together again. 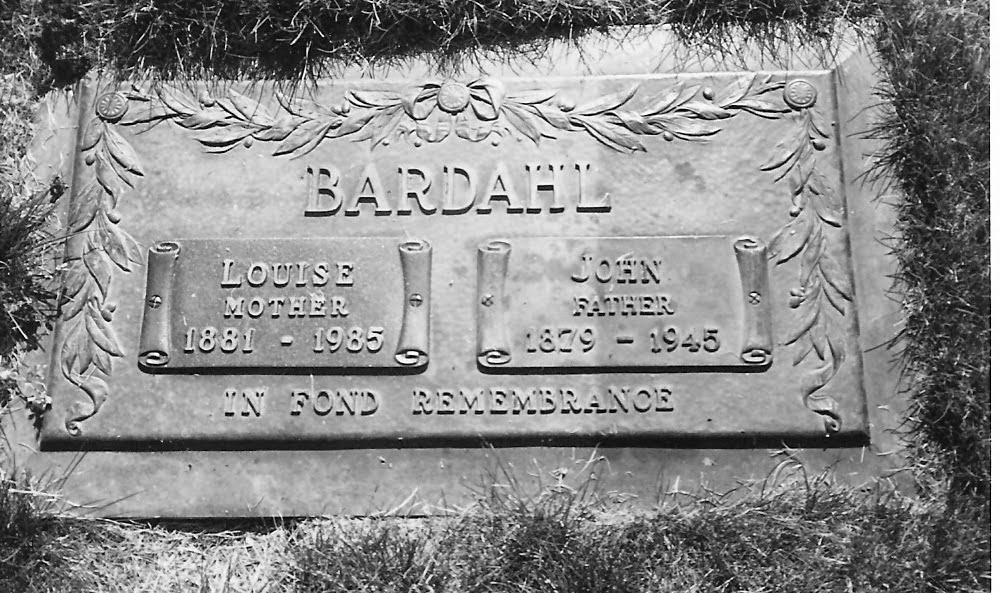