No, I don't think for an instant that my 10X great grandfather John Alden is really a "black sheep". (I don't think of any of my ancestors as black sheep!) Certainly some of them had attributes or behaviours that got them into all sorts of hot water with the authorities of their times. Some were certainly outspoken, opinionated, eccentric and no doubt the subject of gossip and rebuke. Those tend to be the ones whose stories are so interesting! Maybe, when it comes right down to it, most of us are really various shades of  "grey sheep" with admirable characteristics along with a few that might from time to time land us in some sort of trouble or disrepute. John Alden was such a man.

Far from being a black sheep, John Alden is generally respected as one of the earliest American immigrants, having arrived on the Mayflower in 1620. He was not one of those coming to America because or religious persecution but was part of the ship's crew who chose to remain in Plymouth, New England. I like the fact that he was the ship's cooper, charged with the crucial task of tending and repairing the wooden barrels holding beer, strong water (distilled spirits) and water for the trip. Beer was a safer drink than water in those days and apparently everyone, including children, drank it as a regular source of hydration.

Kate Caffrey on page 86 of her book "The Mayflower" says that "One new member of the company came aboard at the last minute, a young cooper named John Alden, tall and fair-haired and powerfully built."

William Bradford, another Mayflower passenger, wrote the definitive source book about the journey and passengers - "Of Plymouth Plantation". On page 441 he lists John as one of the signers of the Mayflower Compact and adds: "John Alden was hired for a cooper at Southampton where the ship was victualled, and being a hopeful young man was much desired but left to his own liking whether to stay when he came here; but he stayed and married here."

In May of 1622 John married Priscilla Mullins at Plymouth Colony.  She was in her late teens and he in his early 20's. This is thought to be just the second marriage to occur in Plymouth Colony. Priscilla had been left alone when her parents William and Alice and brother Joseph Mullins had all died during that treacherous first winter in New England. Priscilla would have been left well off: her father had been a businessman and had brought along 40 pounds worth of shoes and boots to sell. She also would have been left a large amount of money, a number of shares in the Plymouth Colony's joint stock company and all of her family's household goods. John and Priscilla's courtship (and the supposed love triangle with Miles Standish) is recounted in a romantic but probably historically inaccurate poem by Alden descendant William Longworth Longfellow. (The families were, however, to be united in the next generation when John and Priscilla's daughter Sarah married Miles Standish's son Alexander.)

Children started to arrive in 1624 with daughter Elizabeth, then sons John in 1626 and my 9X great grandfather Joseph in 1627. Seven more children were to follow.

John quickly rose within the ranks of Plymouth society. This was probably a combination of his relative wealth and status from his marriage to Priscilla along with his physical stature, honesty and ability. Records show that he was a respected man who was very involved in community affairs and was:

He certainly sounds like a solid family and community man. Where does the "grey sheep" come in?

John Alden was a man of his time and, even though he found himself in some difficult situations, he can probably be forgiven for some matters like these:
Where John Alden's reputation is really tarnished (at least by most modern standards) is with respect to his religious intolerance. Living in a community whose very existence resulted from an escape from religious intolerance in England, it always disappoints me to learn how they treated other religious groups within Plymouth Colony. John Alden persecuted those of other religions mercilessly:
John Alden died at the age of 88 in 1687, outliving many of his children. He is buried beside Priscilla at Duxbury. John Alden's inventory included chairs, bedstead, chests and boxes (probably all made by him), as well as tongs, kettle, saw, augurs and chisel, carpenter joiners, dripping pan, pewter wear, two old guns, table linen, horse bridle and saddle, library, clothing and old lumber.

It is said that until the last he was a bold and hardy man, stern, austere and unyielding. Such qualities can have a positive bearing on family and community but, unfortunately, can also lead to bad treatment of others who have different views. 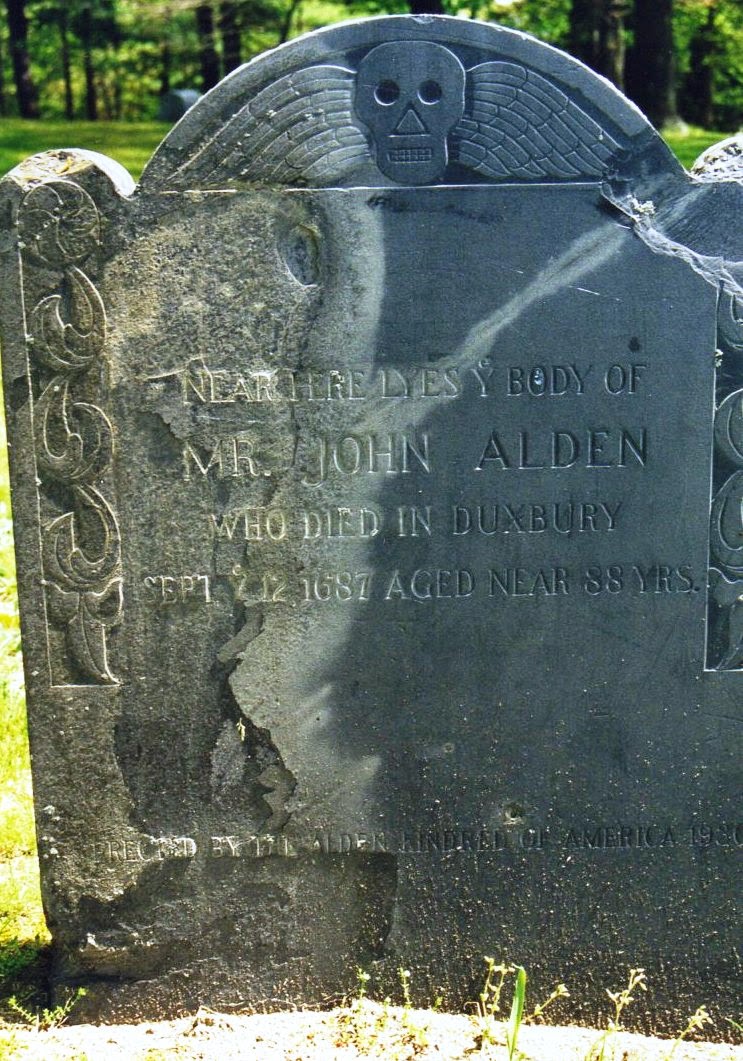 *Johnson, Caleb H., "The Mayflower and Her Passengers", www.xlibris.com, 2006

*Bradford, William, "Of Plimoth Plantation 1620-1647", a digital copy of which can be found with this link