With most of my stories having focused on my mother's maternal line, I was hoping to balance with a story of a June wedding on my father's Norwegian side. There was not a single one to be found! A Norwegian wedding story on my mother's paternal side will have to suffice. Kari Nottolsdatter married Ole Kittilson on Monday 9 June 1783 in Drangedal, Telemark, Norway. Kari and Ole are my 4X great grandparents. 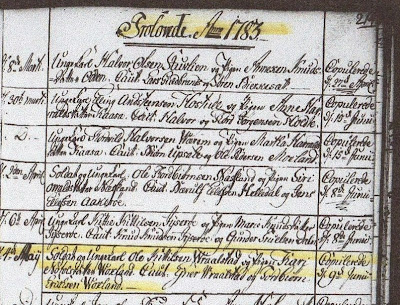 In the kirkebøker (church records) for marriages in 1783 for  Drangedal, Telemark, the yellow-highlighted area in the above marriage record shows that their engagement had been announced on 4 May and the wedding solemnized on 9 June. The record indicates that Ole Kittilson Wraalstad ( sometimes spelled Vraalstad) was a soldier and bachelor and that Kari Notolsdatter Woxland (sometimes spelled Voxland or Vogsland) was a single maiden. The two bondsmen or witnesses were Ener Wraalstad and Tordbiorn Ericksen Woxland. (Vrålstad and Vågsland are the two current "farm names" indicating the area where these two families lived.)


Not surprisingly, no photographs or other details of their wedding are available, but Norwegian marriage traditions can give us some clues as to what the wedding might have entailed. Before they would have announced their engagement at church in May, their families would have had to agree to their marriage. Gifts would have been exchanged during the engagement.

On the day of the wedding, Ole might have worn the traditional bunad (woolen suit) with white shirt, short pants, calf-length stockings, vest and coat when he arrived with his family at Kari's family's home. (Perhaps, being a soldier, he would have worn his uniform instead.) Usually the groom is greeted by the bride's father and given a cup of beer. (Sounds like a good start to the day!) But tradition demands that after he takes just a sip of the beer, the groom must again ask the bride's family if they are still in agreement with the wedding. Obviously the family did agree, and Kari would have then been permitted to make her appearance. The bride's traditional wedding dress is the bridal bunad (a handmade dress of dark blue or black wool embroidered in the traditional Norwegian manner).

Kari would have probably worn the bridal crown of gold or silver dripping with hanging bangles that would have produced a melodic sound as she moved. This is done to ward off evil spirits. The door of her parents' home might have been slammed 3 times as additional protection from evil spirits.


Then a fiddler would have lead the procession to the wedding ceremony, followed by the bride and groom and their families either on foot or on horseback.

Visit the Drangedal church website to see some interior photos of the church and get a better sense of the location of Kari and Ole's wedding. The church was built in 1775 and would have been quite new at the time of their wedding.

After the ceremony, the wedding party would have returned to the family home of Nottol Larsson Vogsland and Kari Torbjørnsdatter Vraalstad (Kari's parents) to eat, drink and dance until the wee hours (or until the bride's crown fell off!). Many toasts would have been made and then the cake would have been cut. One of the more usual types of wedding cake is the kransekake, made from rings of cake stacked atop each other in descending sizes to form a fluted pyramid which is then decorated with icing  and perhaps candy and flowers. Traditionally the bride lifts the top ring off the cake and the number of rings that pull off with it are said to predict the number of children the couple will have. We don't know if Kari indeed pulled off 6 of the top layers!


We don't know whether Kari and Ole went on to "live happily ever after." Although we don't know too much about their lives together, they probably fit into the well-ordered lives of Norwegians at the time. They went on to have a number of children all born in Drangedal, Telemark, Norway:

The family were recorded in the 1801 census where the household consisted of Ole Kittilsen, age 38, farmer in his first marriage, Kari Nottolsdatter, age 40, his wife also in her first marriage, Kittil Olsen 17, Nottol Olsen 15, Lars Olsen 4, Knud Olsen 13, Maria Olsdatter 10, Kari Olsdatter 7. (The children all have the patronymic last name where their father's first name has the suffix "sen" (son) or "datter" (daughter) added.)

Despite much searching for death and burial dates for Kari and Ole, none have been located as yet. They are undoubtedly buried in the cemetery of the Drangedal church where their children had all been baptised and where they had been married so many years before.