My great great grandmother was born Sigrid Knudsdatter Holien to Knud Endressen Holien (or Haalien) and Synnev Haagensdtr and baptised on 14 July 1815 at Holien, Vang, Valdres, Oppland, Norway. Whew! It's easy to see why she often went by a simpler "Sarah Holien" after she emigrated to the United States! Her name isn't the only challenging thing about Sigrid. It has been a bit of a challenge sorting out her children.

Using DNA matches, I have recently located two third cousins 1X removed who also descend from Sigrid. One of them has provided me with this image of Sigrid taken later on in her life.


Sigrid married Erick Andersen Elton of Vang, Valdres, Oppland on 28 October 1844 when she was 29 years old and he was 27. This was a bit older than usual for a Norwegian bride at the time. But Sigrid had not simply been sitting around the house quietly becoming an old maid while doing traditional Norwegian embroidery, not by any means. She had produced two sons out of wedlock prior to her marriage - Hans born 26 April 1841 (father was Asbjorn Asbjornsen) and Evan/Henry born 30 June 1843 (father was Evan Evansen). Conveniently for family historians, the Norwegian church records indicate if a child is born to married or unmarried parents and list both mother and father, having a separate final column for naming who reports the illegitimate child - its mother or a friend or church member. Here are the two records for Sigrid's two sons:


The Vang stave church where the boys were baptized was the subject of much controversy in the 1840's. For over a decade, the church had been considered too small and in such poor repair that plans were afoot for its demolition. A new log church holding over 200 people was eventually constructed. Norwegian artist Johan Christian Dahl was determined to save the old stave church, but ran into ongoing cavils from the locals. Finally he arranged for an acquaintance, the Prussian Crown Prince, to take it over with plans to move it to Potsdam. In 1842 it was painstakingly taken apart, catalogued, pieces carefully organized, loaded onto a barge and taken to Berlin and finally re-erected at Bruckenberg in Germany, now Karpacz in the mountains of Poland. (The full story can be found at this Wikipedia entry.)  This entire saga occurred during the time that Sigrid was giving birth to babies and shortly before she got married. It would no doubt have been the talk of the parish. One might hope that it gave people something to gossip about other than Sigrid and her two sons born out of wedlock.

An interesting if somewhat surreal view of the ancient Vang Stave church where it is now located in Poland was recently filmed from a drone.

Sigrid went on to produce two daughters after she married Erich. Their daughter Synnev was baptised at Vang on 12 July 1845. A second daughter Anne (my great grandmother, also known as Anna or Annie) was born 14 March 1849 at Vang, Valdres, Oppland. (Anne would marry my great grandfather Hans Bardahl and become the mother of my grandfather John Bardahl. One of the witnesses at the wedding was Anne's half-brother Hans Holien. Until I discovered that he had been Sigrid's son born from an earlier relationship, I had often wondered if he might be related since he used the same farm name.)


Erick sold the Elton farm to his sister Anne Andersdtr Elton and her husband Trond Ivarsson Eltun in the autumn of 1853 and he and Sigrid moved to America in 1854, leaving Bergen on 15 April. The church records (kirkebøker) list their departure for "Amerika" on 10 April as follows: Erich Andersen age 38, Sigrid Knudsdr age 39, Sanneva age 11, Anne age 5, Par Asylynsen age 13 (probably Hans Asbjornsen) and Sigrid Anderstr (Erich's sister) age 24. No mention is made of the other son Evan. There are pages and pages of departures for America in these church records throughout the 1850's - it is clearly a time of mass emigration.

On arriving in America, they often used the farm name as their surname Elton (sometimes given as Eltun, Elson, Ellent and other variations), Sigrid sometimes became Sarah but sometimes still retained her Norwegian surname of Holien and daughter Synova became Susan. The Eltons first settled in Iowa but soon moved to Goodhue County, Minnesota, an area populated by a massive number of Norwegian immigrants.

Erick met his death tragically in 1855 by being crushed under a falling tree and is buried at the Old Hauge Cemetery. He was just 38 or 39 years of age and it must have been a devastating loss to Sigrid and the family. No record of another marriage for her has come to light.

By the time of the 1880 US census, Sigrid Holien is listed as the 65 year-old head of the household at Warsaw, Goodhue County, Minnesota. Living with her are 39 year-old son Hans Holien, daughter-in-law Synner Holien (28), granddaughter Dinah (6), nephew Hulbrand Holien (20), grandson Almer Holien (2), nephew Gulbrand Holien (20), Andrew K Anderson (36), Andreas Overby (16) and grandson Endre Holien (10). Only the three youngest Holien grandchildren had been born in Minnesota and all others had been born in Norway.

Sigrid lived to the age of 75 , dying on 28 March 1891. She is buried at the Vang Lutheran Cemetery at Dennison, Goodhue County, Minnesota. 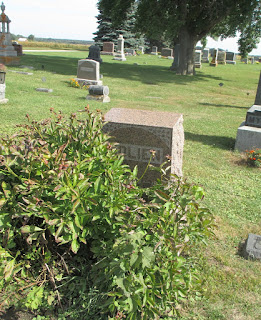