This week's suggested theme is "Proud: Which ancestor did something that made you proud?" Like so many other "ordinary" immigrant women, my great grandmother Karen Marie Nilsdatter lived a life of courage and determination in starting over in a new land. No, she did nothing particularly heroic that would have garnered her any medals. Although no history books are likely to ever celebrate her achievements, she quietly went about doing what was required of her, leaving a trail of strength, goodness and love in her wake.

Karen was born in Norderhov, Ringerike, Buskerud, Norway on 23 December 1842 to Nils Torgersen and Olia Sorensdatter. No doubt because of the winter season, she was not baptised until 17 April 1843.

At the age of 15 she was confirmed in the local Norderhov Lutheran Church. 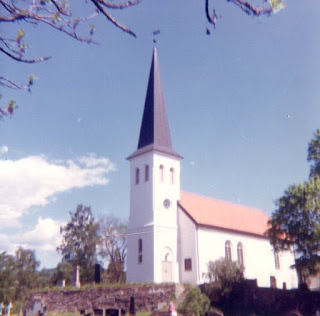 Other images of this church (including its beautiful interior) and a description of the church, which was built in 1170, can be found through this link.

On the third of July in 1866, Karen married Carl Johan Nelson in the church pictured above. Their daughter Gunhild was born 23 August and baptised there on 15 September. Newlyweds Karen and Carl and baby Gunhild soon packed up and headed to America. The church records in Norway kept track of people who moved out of the parish in their "Uttflyttede" records such as this 1867 record for the departure of Karen, Carl and Gunhild to Wisconsin, America, recorded in January of 1867. One must admire women like Karen who could take a young baby on this courageous voyage across the Atlantic to an unknown life in America, knowing that she would probably never again see close friends, family, and the community that had formed her entire life to that point.

The story passed down in the family to my cousin Karen regarding her namesake great grandmother is one that makes me proud to descend from this woman. Apparently, at one time she and Carl experienced a difficult situation and Carl was about to throw up his hands in despair, asking how they were expected to move a lot of heavy sacks of grain across a road without a horse. Karen's response was to hoist up a load herself and say, "Like this." No doubt this is just one small example of this woman's strength of purpose. She was not just along for the ride but was a contributing partner to their success in establishing their family in this new land with new language and new culture.

They were in Wisconsin for only about 3 months before moving to Minnesota, first to Douglas County and later to Erdahl, Grant County, where they would remain for the rest of their lives. Census records show Carl and Karen and their growing family of 7 daughters and one son. Their youngest daughter, Louise, was my paternal grandmother. 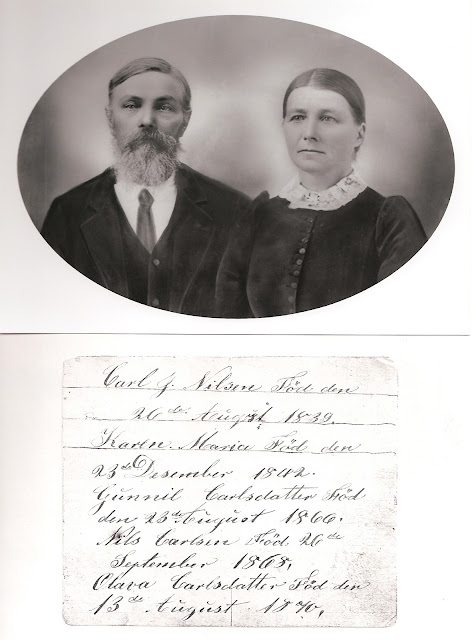 Her obituary was published in the Grant County Herald on 4 November 1915, page 5, part of which reads as follows:


"The death of Mrs. Carl Nelson at her home south of Erdahl Wednesday, October 27, after a lingering illness of about a year, marks the passing of one of Grant county's pioneers, and a woman loved and respected by all who knew her.

Mrs. Nelson shared with her husband all the hardships and trials of pioneer days, as well as the happiness of contentment and achievement.

The funeral was held Friday, October 29 from the home, and later at the Synod Church in Erdahl, of which the deceased was a member. Interment was made in the Pomme de Terre Lake Cemetery."