The suggested theme for this week in Amy Johnson Crow's "52 Ancestors in 52 Weeks" is "Changes - Highlight an ancestor that went through many changes or that you had to change your research strategies to find." Either way you look at it, my great grandfather Charles F. Edwards fits the bill.

Born 22 February 1869 in Keokuk, Iowa, Charles changed both residence and career numerous times over his 72 year life.  We know that he lived in Iowa, Kansas, Montana, Washington, and in Saskatchewan, Canada. Before his marriage license and certificate were issued for his Great Falls, Montana, marriage to Mary Jane Wescott on 01 October 1896, records for his early life in Iowa and Kansas remained elusive.

The details that Charles divulged to his family about his early history included the following:

I spent more than 10 years following up on these clues, searching rolls of microfilm for census records in both Iowa and Kansas, searching microfilm and microfiche Quaker records for logical locations for the family and researching the family history of President Herbert Hoover to see if I could find Charles and his mother Rachel. Online searches were conducted. Letters were written. Nothing. This was a true brick wall yielding few results no matter what was tried.

When the 1880 US Census was available online in a searchable format, I was able to find a family grouping with distinct possibilities located in Howard, Elk County, Kansas:

We had been told that Charles's mother had married a Payton and here was a Payton family grouping with 3 Edwards stepchildren: Martha and Mary (not Minnie and Grace) both 14 and Charles 11, all born in Iowa. But the mother of the household was named "Barbary", not Rachel. Had Charles's mother Rachel died by now and had George Payton already remarried?


According to information provided in his license application, the names of Charles's parents were Martha Hoover (not Rachel and not Barbary either) and Louis Edwards. Finally I had some documented parental names to work with!

More years would pass without further significant finds regarding his early years, notwithstanding various ongoing attempts. The years following his marriage to Mary-Jane Wescott are easier to follow.  What we know about their family life:

But what about his early life? Details remained elusive. Maybe I needed to try something different in my searches, make a change of my own. Not being sure whether the "Keokuk, Iowa" where Charles said he had been born was the town of Keokuk in Lee County or whether it was somewhere in Keokuk County, I decided to join the Iowa Genealogical Society to see if I could learn something through membership in a local organization there. I read through their journals and continued my search. One of the benefits of membership was the ability to post queries in their journals so I sent off my inquiry by regular mail as required. Nothing happened and the supply of journals dried up. I asked their webmaster Alice Veen what had happened and was told that financial troubles were at the root of the society's problems. However, she told me that she was working on her professional genealogist accreditation and needed another project. She thought my mysterious great grandfather might be just the project she needed and asked if she could do the research for me, free of charge? Oh, yes, please, Alice!

Although I am sad to report that it wasn't through my own efforts, this significant change in bringing in a fresh set of "almost professional" eyes finally brought results. Alice would painstakingly piece together some of the mystery of those early years. Charles had not been orphaned. He was born in Iowa 3 years after his mother's Edwards husband had died (from tuberculosis contracted during his service in the American Civil War) and 4 years before she married her Payton husband. We have not yet been able to learn who Charles's father was. However, Alice was able to find a mother for Charles: her name was Barbara Hoover (not Martha nor Rachel but apparently one and the same as the Barbary in the 1880 census record). All the name changes and changed family details were no doubt a cover-up for what Charles must have seen as the shameful reality of his birth. How my heart breaks for him! Other things Alice uncovered about those early years:

Like his mother who seemed to have gone by various names (Barbara, Barbary, and Margaret to name those on official documents, never mind Rachel and Martha that Charles had called her!), Charles himself played a bit fast and loose with his own middle name. His immediate family thought his middle name was "Francis", but his Declaration of Intention (to renounce his allegiance to the British King) has him signing his name as "Charles Franklin Edwards" and his more reliable sister Grace told her family that the name was Charles Franklin Edwards. (Could this be a clue about his father? Did Charles ever even know who his father was?) 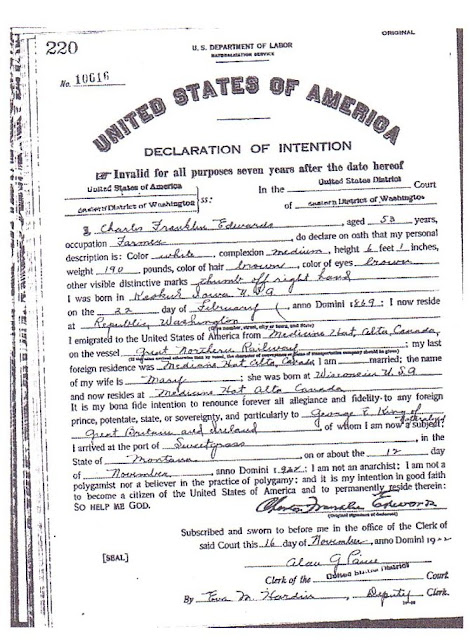 One final matter came to light in the obituaries for mother Barbara. Charles had had yet another career, this time in the hospitality industry. He was called "Clerk of the Caldwell House". A bit of a chameleon, my great grandfather! Always looking for the next break that would improve his lot, he made numerous changes throughout his life. Unfortunately, he often seemed to make the changes too late and miss the tide that would have carried him to his much-sought-after fortune.