Elizabeth was generally known as "Betsey". Perhaps she was even better known as "Mother" since she and husband Stephen Westcott were the parents of 13 children. Betsey and Stephen were my 4th great grandparents. Their children (born between 1795 and about 1818) were:

(Possibly the couple had one additional child who died in infancy since there is a Westcott baby buried in the same tiny Davis-Dickson cemetery where Stephen will eventually be laid to rest. That child died 19 May 1810 at the age of just 9 days. Stephen's daughter Polina Westcott Davis and her husband will also be buried there many years later. There are only 6 people in total buried in this cemetery, making it likely that the infant was a 14th child of Betsey and Stephen's. Oh, Betsey! 14 pregnancies? By my calculation, you spent 10 or more years of your life being pregnant, so say nothing of the years of breastfeeding and raising this large family.) 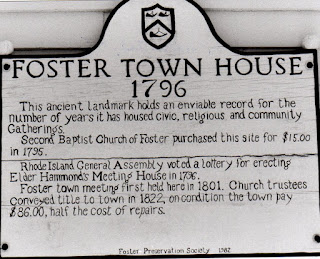 Of course Betsey wasn't always a mother. She was born about 1775 in Foster, Providence Co., Rhode Island to Oliver Carver and Mary Perkins. When she was about 19, she married Stephen Westcott in Foster. The marriage was performed from his full height of 6 feet 5 inches by Justice of the Peace Daniel Howard. Stephen, born 2 April 1775, was also 19 at the time of their marriage. For both, their earliest childhood years would have occurred during the American Revolution and one cannot help but wonder about the impact of that on their families. No evidence has been found that either had a father who participated directly in the War.

Although their earliest children were born in Foster, RI, Stephen and Betsey soon migrated to Butler, Wayne County, NY where they settled on a farm. At the time of their move, this would have been a remote region near Lake Ontario that was just being settled. The War of 1812 would have been occurring around them but we don't have any details of its impact on them. Even after the Erie Canal was built through their area in the mid 1820's, it would have been several miles away from them. In fact, we know very little of the detail of their lives during the period that they were raising their huge family.

There was a Stephen Westcott in the New York State Militia but, with the Westcott family being such a prolific one, we don't know for sure if this was Betsey's Stephen.

Stephen died in 1830 at the age of 55 and is buried in the small private cemetery shown below. Just 6 people are buried here including daughter Polina and Polina's husband and perhaps that 14th child who died in infancy. Some of Stephen and Betsey's younger children would have still been in their teens, but no doubt the older children pitched in to help Betsey in her widowhood.


"This stone his memory long shall tell

We weep for him they love so well.

Shed such tears as give relief."


Betsey would outlive Stephen by 28 years, dying 12 September 1858 at age 82. She is buried in Butler Center Cemetery. We don't know where she spent those final years, but one might assume that someone in her large family provided her with a comfortable home during her long widowhood.