For this week's "Unusual" theme, I've asked myself which of my immigrant ancestors brought the most unusual item from Europe to North America. What couldn't be left behind in England? Perhaps it could be William Mullins, my 11th great grandfather, a merchant who brought a full supply of boots and shoes with him on the Mayflower. (William's plan to set up shop selling footwear in the New World ended before it began. He died shortly after arriving at Plymouth.) But, no, the award for most unusual item clearly belongs to my 9th great grandfather John Prescott who brought along a full suit of armour. Either he brought it from England, or as a blacksmith and metal worker, he may have made it for himself after arriving in New England - something that would be equally unusual.


John may have been born in Lancashire, England, although there is some confusion and lack of proof as to exactly where he originated. Unfortunately, no records firmly attached to this John Prescott have been identified for the first two dozen years of his life.

The first definite record occurred when he married Mary Gawkroger Platts in her home town of Sowerby, Yorkshire, England on 11 April 1629.


Their first five children were born at Sowerby with two dying young.


John, Mary and their three surviving children migrated first to Barbados in 1638 where daughter Hannah was born in 1639. They came to Watertown in what is now Massachusetts in about 1640. Daughter Lydia Prescott (my 8th great grandmother, wife of Jonas Fairbanks) was born in Watertown on 15 August 1641.

John owned 126 acres of land there, but by 1643 he and others purchased 80 sections of land from the Nashaway, an Algonquin tribe of Native Americans. The settlement was known first as Nashaway Plantation and later as Lancaster, MA. "Nashawog" means "land in the angle made by two rivers", which certainly describes the geography here. The area around Lancaster was thought to contain a wealth of minerals to be exploited and several of the men interested in the enterprise, including John Prescott, were workers in iron.


There was some difficulty in gaining access to their new lands since the Sudbury River posed a natural barrier. The purchasers petitioned the General Court to have a bridge constructed, but this was not a priority for the General Court. Apparently Prescott lost his horse and all its load while crossing the River and when his wife and children tried to cross on horseback a week later, they barely made it across with their lives.

Notwithstanding the difficulties, by 1645, he settled on his land there and is regarded as the founder of the town. Two sons, Jonathan and Jonas, were born there in 1646 and 1648, completing the family.

The original name proposed by the settlers for the town of Lancaster was Prescott  in John's honour, but this was rejected by the General Court as smacking of "man-worship". At the next sitting of the General Court, the name became Lancaster, probably to honour the settlers' English homeland. Even though his name had been rejected, Prescott was the first to subscribe to the town covenant.


Elizabeth Titcomb says in her book that "Mr. Prescott at a very early day became a leading spirit and a prominent and influential man." She says that he "was a man of strict integrity and of great energy and perseverance."

Certainly he made his mark on the community and is frequently mentioned in its records. He had other professions as well as blacksmith - farmer, surveyor, millwright and miller as well as builder and operator of sawmills. Prescott had a millstone delivered to Lancaster in 1653 and this enabled the locals to grind their grain locally rather than having to take it to nearby Watertown. Nourse in his 1884 "Early Records of Lancaster" describes the significance of this venture on page 31:

"The arrival of Prescott's millstone in Lancaster must have been an event of matchless interest to every man, woman and child in the settlement. Until that began its tireless turning, the grain for their every loaf of bread had to be carried to Watertown mill, or ground laboriously in a hand quern, or parched and brayed in a mortar Indian fashion, or hulled and softened with lye and crushed, as is the practice to this day in some regions of North America."


The value of Prescott's estate by 1654 was in excess of 366 pounds, making him the 2nd wealthiest man in the area. By 1659 he also had  built a sawmill and house in nearby Clinton and a sawmill in Groton in 1667. Describing the significance of Prescott's sawmills to the housing situation in Lancaster, Nourse says on page 57:


"Before Prescott started his saw-mill, all houses of the town must have been rude structures of logs, hewn timber, stone and clay, for it was an impossibility to bring from the lower towns over the existing roads, and on the rude cart of the period, any large amount of sawn lumber. . . . It would be natural at first for builders to rest content with a single story, for few pioneers could afford more; but after 1658, with Prescott's saw-mill in successful operation, doubtless a few more pretentious structures arose. Daniel Hudson, a brickmaker and mason, was here resident in 1651. Nails, large and small, and all other articles of constructive hardware were made laboriously by hand upon the smith's anvil. Paint was unknown. "


There is some suggestion that he served under Oliver Cromwell in England. Some believe this to be impossible because he had moved to New England by the time of the English Civil War, but some of the early settlers did return to England to fight with Cromwell.

As to his "unusual" possession, John is known to have owned and worn a complete suit of armour - coat of mail, helmet, cuirass and gorget. Perhaps it came with him on his original voyage from England or on a return trip after serving with Cromwell - or some have suggested that capable iron worker John fashioned it for himself. In any event, there are some interesting tales that surround it and its owner.

According to Elizabeth Titcomb, John would put on his suit of armour whenever he had difficulties with the Native Americans. She says that "He was a very strong athletic man of a stern countenance and upon such occasions he presented a very fierce and frightful appearance."

One particular situation is described in which a group of Native Americans had stolen a horse of John's and he put on his armour and went in hot pursuit. Surprised that he would follow them on his own, a chief approached him with upraised tomahawk. When Prescott told him to go ahead and strike him, the chief did so and was amazed that it made no mark on Prescott's head. The chief wanted to try it out for himself and put the helmet on so that Prescott could strike him. However, the helmet was too small and scraped the sides of the chief's head when Prescott banged on its top, resulting in an increase in Prescott's mystique. John got his horse back.

Another time, the American Natives set fire to Prescott's sawmill. Again, he donned his armour and went out and doused the flames with no fear of ambush.

When they attacked his house, he was well-armed with many muskets but he and wife Mary were there alone. Mary loaded the guns and John discharged them, all the time shouting loud orders as if he had a house full of soldiers. Eventually, the attackers withdrew with their dead and wounded.


We have seen that John could be a man of action as well as a capable and practical man of industry. He didn't neglect his community obligations either. He served on a grand jury on 28 March 1673/4 and 20 March 1674/5 and often served as prudential manager or Selectman of the town.

Before the massacre at Lancaster during King Philip's War, he owned about 1200 acres of land in South Lancaster, Clinton, Washacum Pond in Sterling and Groton. The massacre left all the homes burned and some 50 inhabitants dead or captive. John Prescott lost family members including two grandsons and two sons-in-law (including my 8th great grandfather Jonas Fairbanks). The surviving town members left the area for safety in more populated towns for the duration of King Philip's War. They returned in about 1779, with aging John Prescott again taking the lead. At the time of his death in 1681, he still possessed about 700 acres at Lancaster.

He is buried in the Old Settlers' Burial Field at Lancaster. This cemetery is difficult to find down a twisting trail under a railroad bridge. The site has a mystical quality to it, especially on a misty drizzly day such as we enjoyed during our May 1999 visit there.


His original headstone is a very crude one ("John Prescott|Decased (sic)") located in front of the large memorial put up some 50 years after his death.


The larger memorial says: "Here with his children around him lies John Prescott, founder of Lancaster and first settler of Worcester County. Born at Standish, Lancashire, England, died at Lancaster MA December, 1681. Inspired by the love of liberty and the fear of God this stout-hearted pioneer forsaking the pleasant vales of England took up his abode in the unbroken forest and encountered  wild beast and savage to secure freedom for himself and his posterity. His faith and virtues have been inherited by many descendants who in every generation have well served the state in war, in literature, at the bar, in the pulpit, in public life and Christian homes."  (Text by Senator George F. Hoar) 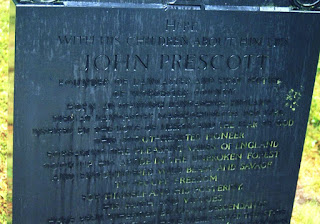 After this death, his favourite matchlock musket gun that he had brought from England (and that Mary had reloaded during the attack on their house) was passed down to oldest son John and through his family line until it was finally donated to the Wisconsin Historical Society in Madison, Wisconsin where it no doubt still resides. Pictures of it can be seen through this link.

So then, what became of his suit of armour after his death? Although there is no specific mention of it in his will, as part of his "movables", it would have first gone to his wife for her lifetime (and although she was obviously a strong and capable woman, one cannot imagine her ever making much use of it). After her death, such movables were to be divided evenly between sons John and Jonathan. No further records or stories have been found of anyone making use of John's suit of armour as he had done in such an unusual manner.