Like those little Russian dolls that nest inside each other, a womb within a womb within a womb, my third great-grandmother Jane Murdie is my outermost doll. There would, of course, be other dolls beyond Jane, but to date I have been frustrated in my attempts to find them. Coincidentally with the timing of this week's theme for "closest birthday", Jane and I both have birthdays this last week of January, just two days apart.

Having had DNA testing done on my mitochondrial DNA, I feel even closer to Jane. Since this is passed down the female line, she supplies the H2A1 haplogroup DNA that I contain.  This haplogroup is found in northern Europe and has not told me anything surprising about Jane's background. As someone who has always enjoyed fabric and sewing and whose mother, grandmother and great-grandmother had a similar interest, I often wonder if that passion extends back another couple of generations to include Jane.

Jane has been said to have been born in Scotland, although some of her descendants also believe she was born in New York State of Scottish parents, so the nesting Russian dolls in my mind's eye should perhaps be little Scots dressed in tartan.

All we really know about her parents is from the "Source Book for the Bullen Family" (also known as the "Nelson/Dunlop Papers"), an unpublished collection of transcribed letters assembled by two descendants in the 1930's.  The following is from a letter in that collection dated 19 October 1935 to Eva Bullen Wescott from her cousin Americus Vespucius Brown (a grandson of Jane's whose parents were very considerate to future genealogists): "Mother was born in Hannibal, New York.  Her mother was Jane Murdy.  Her grandmother and she who was her mother came west from NY and settled in northern Illinois with their people.  Her grandfather came later as he was a breeder of fine horses - bringing some blooded stock. When he got where they were he wanted to see farther west so he hitched up a team and started out. It was the last seen or heard of him. It was always supposed he was killed by the Indians for his team."

After her father's disappearance and presumed death, Jane's mother married a Mr. Chambers who was the father of Kate and Mary Chambers (1818-1855).  Mary married Horace Weaver (1810-1867) and had three children: Kate (Mrs. Ben Miller), Jennie (Mrs. Lucien Thompson) and Fred.  All attempts to locate more information about Jane's mother by using this family from her second marriage have led nowhere.

Much of the extended Bullen family made the move from New York to Wisconsin in the mid 1830's. Jane's nephew-in-law John Bullen, Jr. was instrumental in settling and founding Kenosha, Wisconsin (north of Chicago on Lake Michigan). In December of 1834, he had invited a number of prominent citizens of Hannibal to dinner in an attempt to interest them in his profit-sharing venture, the Western Immigration Association. One group reached Kenosha on 21 June 1835 and settled on land that had been staked there. Travel for the settlers was made overland by wagons (drawn by horses and oxen) and by water via canal boat and steam boats, often encountering gales and ice jams that forced them to await better conditions or divert to Chicago. May Philips Train commented that on one canal boat trip in 1837, John Bullen's family had as a fellow passenger Brigham Young who was on his way to join Joe Smith and the Mormons who were gathering in Kirkland, Ohio and "several of the older members of the family engaged in animated discussions with him".

It wasn't long before David and Jane moved their family from New York State to Wisconsin to join the others. They went by sailing vessel, a journey that took them 6 weeks.  They went inland from Kenosha to Boltonville (now within the town of Farmington, Wisconsin) where David took up and cleared land which he farmed, along with their sons.

The 1850 US census is one of the few documents in which Jane is named. She is 40, living with her husband David, 62 and growing family, the youngest of whom is my 2nd great grandmother Sarah, age 13. 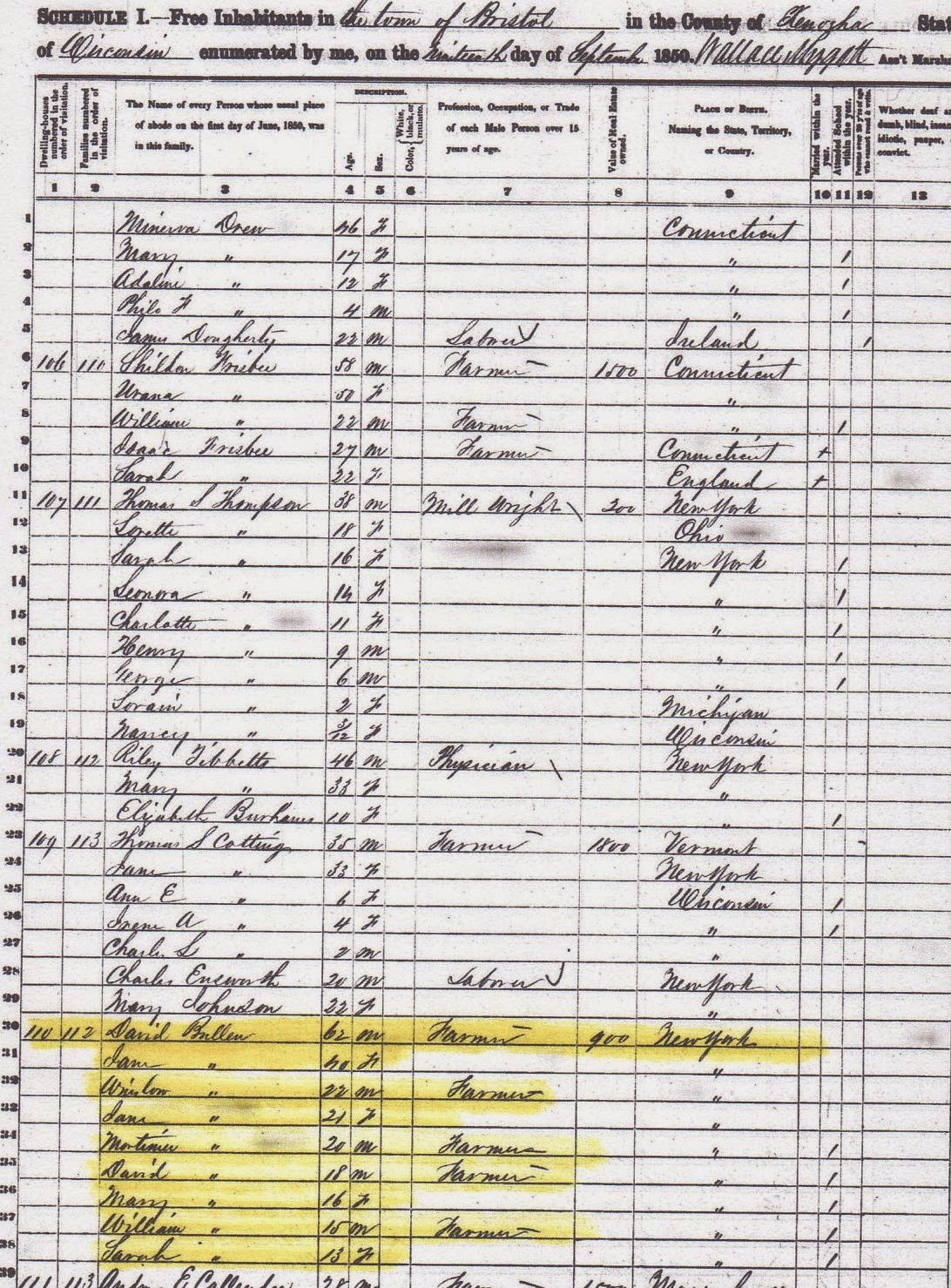 Jane died in 1857 or 1858. After her death, David moved to Arlington, Columbia County, Wisconsin to be near his children.  He survived Jane by about 20 years and is buried at the cemetery at Arlington. Attempts to locate Jane's grave have been unsuccessful thus far. No birth or death records have been found for her. One descendant says she died 7/11/1858 in West Bend, Wisconsin, but no evidence for that has been located.

In January of 2008, Diane Rice Young (another descendant of Jane's) took a birthday cake in honour of Jane's 207th birthday to the meeting of her Genealogical Society of South Brevard in Melbourne, Florida. This week in celebration of our birthdays, I plan to toast my elusive Jane with a wee dram of Scotland's finest.