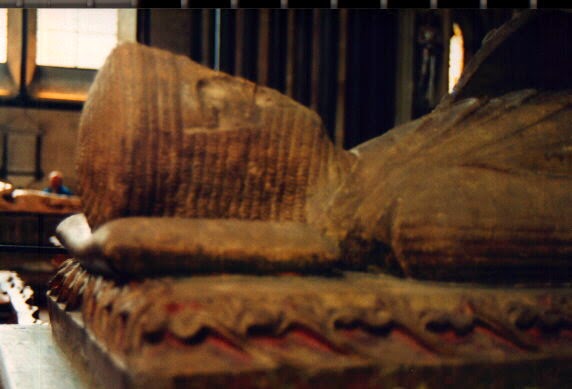 I must confess to wearing my skeptic's hat when I claim William Longespee as my 22nd great grandfather on my mother's maternal line. He lived so long ago during the times of chivalry that his story seems to belong more in the realm of romantic fairy tales than in a collection of real family stories.  There is one link in the ancestral chain that has not been proven, namely that my 9th great grandfather John Prescott, who emigrated to Massachusetts in 1637, was the son of William's 12th great grandson Ralph Prescott of Standish, Lancaster, England. Circumstantial evidence is strongly in favour of such a relationship but this is one area that requires additional research.  For purposes of this week's challenge on the "King" theme, I cannot resist using William's story because it has so much going for it - illegitimate royal birth, battles and honours, illustrious marriage, intrigue and quite possibly murder.

As a child, I revelled in the tales of Robin Hood. I despised the villainous Prince John while admiring King Richard I the Lionheart (later learning that their characters were not so black and white as portrayed on television and in storybooks). Remembering childhood visions of knights in shining armour, castles and kings and princes, the possibility of having an ancestor living in a castle as John's and Richard's half-brother seems very unlikely.

William grew up in court as the acknowledged son of King Henry II, but for the longest time it was not clear which of Henry's mistresses was William's mother. It is, of course, unusual for the mystery parent to be the mother rather than the father. For some time she was thought to be "The Fair Rosamond", Rosamond Clifford.  However, meticulous research conducted by historical fiction writer Elizabeth Chadwick led to the discovery of a document of William's that identifies his mother as Ida de Tosny.  Ida was a royal ward of King Henry II and also his mistress. By today's standards, this would be considered outrageous conduct and a clear breach of Henry's duty to protect the young woman. Nevertheless, Henry thereafter arranged a good marriage for her to Roger Bigod, 2nd Earl of Norfolk, and returned to Roger the manors that had previously been taken from him. But Henry kept young William at court.

King Henry acknowledged William as his son and gave him many honours. William was said to have been a very prudent man and tended to stay out of trouble while being supportive of his father and his half-brothers. No wonder he was considered one of Henry's favourites! In 1196, his half-brother King Richard the Lionheart married him to a great heiress, the nine year-old Ela of Salisbury, 3rd Countess of Salisbury in her own right, thereby making William the 3rd Earl of Salisbury.

He was still in favour when his other half-brother ascended the throne to become King John.  William was often at court and participated in many significant events of the day.  Among many other appointments, he was Sheriff of Wiltshire, Warden of the Welsh Marches and Sheriff of Cambridgeshire and Huntingdonshire.

William was considered to be one of the most experienced and capable military leaders in England at the time. During King John's disputes with Philip of France in 1212, William commanded a fleet of 500 ships and a force of 700 knights and horse soldiers that attacked and destroyed the unsuspecting French fleet. Two years later things did not go so well. In another battle with the French, he was beaten from his horse and taken prisoner. King John entered into negotiations and arranged his release.

When William returned to England, it was a time of revolt among the barons leading to King John's signing of Magna Carta at Runnymeade in 1215. William's name appears in the preamble to Magna Carta in the list of illustrious men who had provided advice to the King. He was one of the few who remained loyal to King John throughout this difficult time.

After King John's death, William and other barons worked to have John's young son crowned as Henry III. He held an influential position during young Henry's minority.

In 1220, William and wife Ela were principal patrons in the building of Salisbury Cathedral. In addition to their busy public life, the couple had a large family of four sons and six daughters.

The final chapter of his life reads like a mystery. His ship was nearly lost at sea while returning to England from Gascony in a storm in 1225. William survived for several months by taking refuge in a monastery on a French island. While he was gone, many assumed he was dead and Ela (with her lands and title) was considered a great catch.  William did return home but died very shortly thereafter. It was suspected that he might have been poisoned by one of Ela's suitors, Hubert de Burgh. Credence was given to this centuries later when William's tomb was opened to reveal the well-preserved corpse of a rat in his skull, possibly indicative of arsenic poisoning. 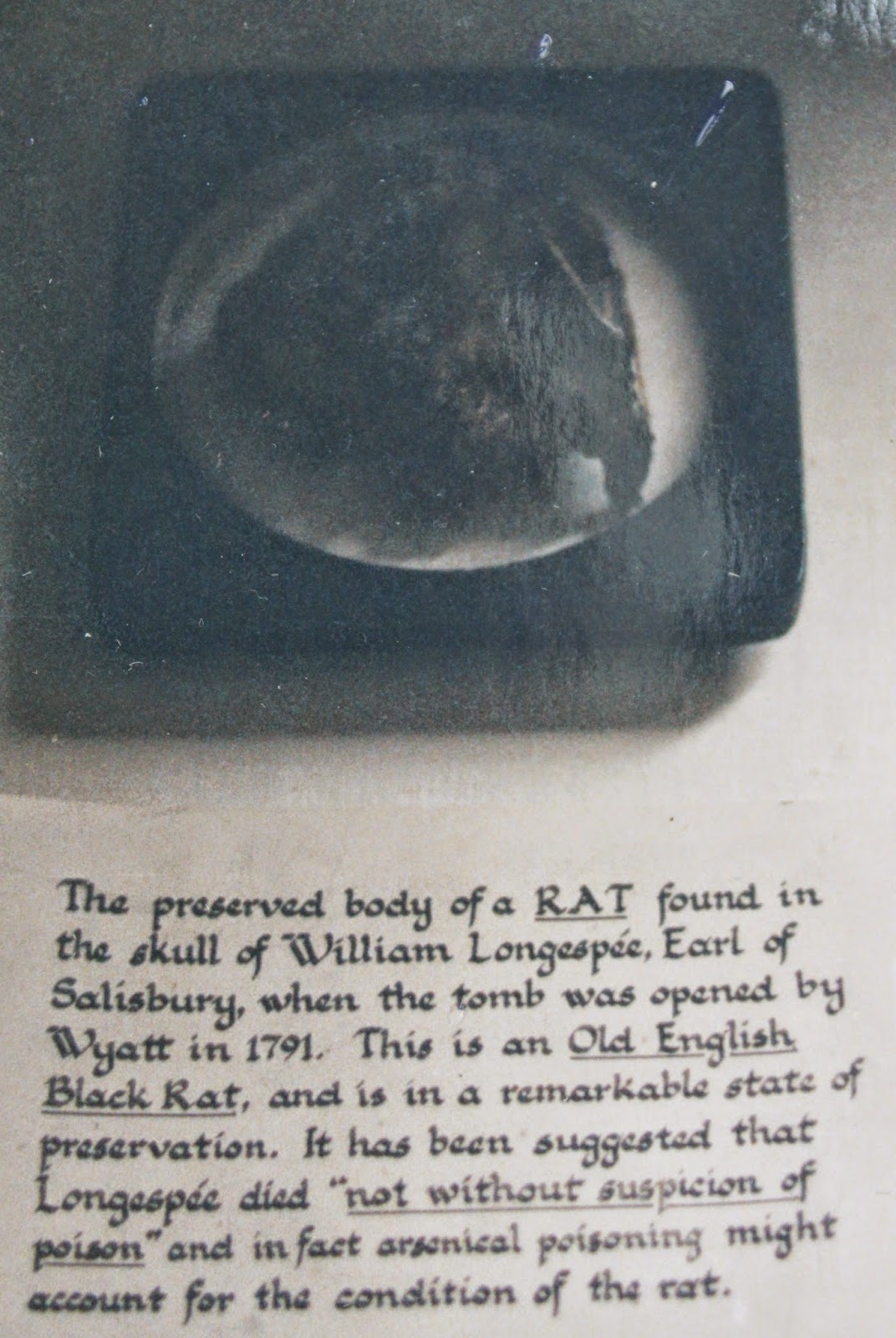 William was the first person to be buried in Salisbury Cathedral.  His splendid tomb and effigy are prominently displayed in the south aisle of the nave. 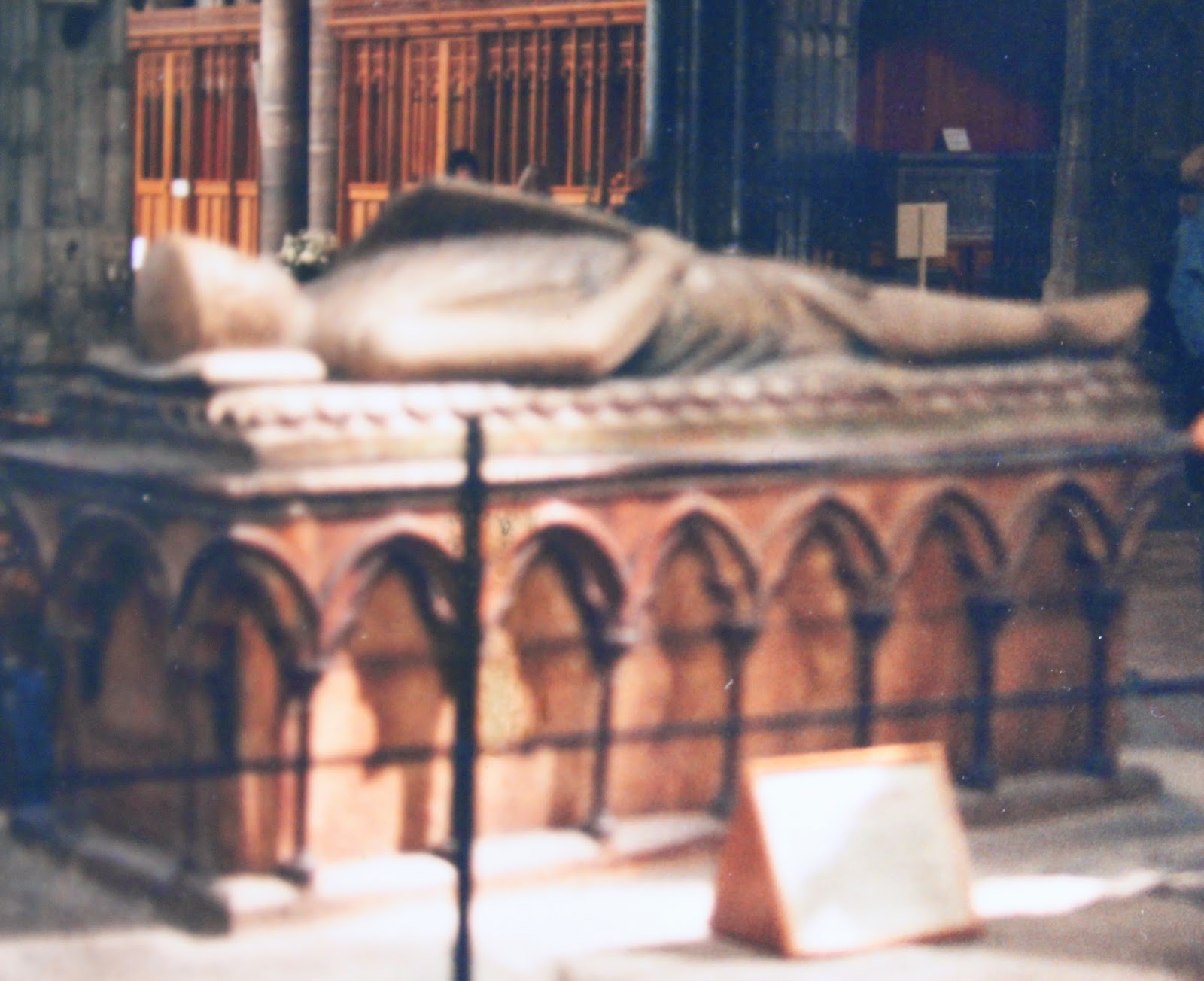