This week's theme relates to special census schedules. We were asked: "Have you found an ancestor on a non-population census -- agriculture, industry, manufacture, or 1890 Union veterans?"

Having served in the American Civil War, my great great grandfather George Garner Wescott shows up in such a schedule. A fortunate thing indeed to have had an ancestor survive the Civil War and return home to father the child from whom one descends! Also fortunate that this ancestor was swallowed up in the bureaucratic paper trail that leaves such an abundance of genealogical data for his descendants.


The 1890 Veterans Schedules were separate schedules of the 1890 American Federal Census that listed Union Civil War veterans or their widows. (Sometimes Confederate veterans were included by mistake but this was really intended only for Union veterans.)

Several Wescotts, in fact more than one George Wescott, had enlisted in the Civil War from Wisconsin. In a misguided attempt to avoid confusion, our George enlisted under his middle name "Garner", although as might be expected, that created its own confusion. But in this Schedule, he is identified by his actual name of George G. Wescott, a Private in Company D of the 12th Wisconsin Infantry. The Schedule also includes the length of his service from his enlistment on 15 October 1864 until discharge on 20 July 1865. (The length of service given at more than one year is puzzling - it would appear that it should be in the region of 9 months.) He lived at Unity, Marathon, Wisconsin and had been troubled since the war with kidney disease.

A new statute in 1912 meant that an additional "Declaration for Pension" had to be submitted. It repeats much of the earlier information (including his supposed birth in "Canada" on 20 April 1836). One new bit of information was the list of his several places of residence since leaving the service:
Further details about wife and children were requested in a form filled out and signed by "Garner Wescott" on 26 August 1915:

George received his pension until his death on 19 May 1916. The pension application file contains his death certificate (shown above) showing that it was heart failure that got him in the end -- and then his pension was terminated abruptly, stamped "DEAD" and "DROPPED".

His accrued pension of $22.50 was paid out to widow Sarah in November of 1916. In the meantime, Sarah was making her own application for a Widow's Pension.  The confusion over her husband's names continued to haunt the process and necessitated additional documentation and correspondence. She also had to produce a Marriage Certificate, a typed copy of which is now conveniently found in the Pension Application File. 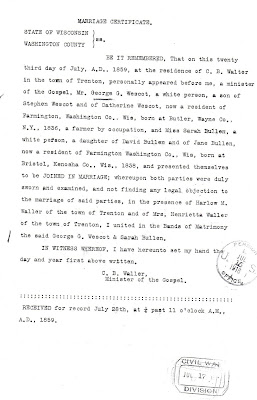 Sarah was awarded a Widow's Pension of $12 per month from June to September of 1916 and then $20 per month after that. In 1926, this was increased to $50 per month. Sarah received her Widow's Pension until she died in early January of 1933. At that point, George's Civil War paper trail finally ended some 68 years after his discharge from the Union army.


Aside from the photographs, the foregoing information was all gleaned from the records resulting from George's Civil War service. We do know a bit more about him based on other family sources.

His Discharge Certificate from the Union army is described by his granddaughter Evelyn in a letter to her cousin Grace McBride 2 May 1964:  "Grandpa's discharge is a huge thing about a yard long and 22 inches wide. . . . At the top are statues of soldiers and flags, and the eagle at the base. Beneath the feet of the eagle is a picture of a partially unrolled discharge. Below that are the word 'May future generations never forget the Debt of Gratitude they owe to the Brave Boys in Blue who on this land and sea Volunteered their services during the memorable struggle for the preservation of the Union. To all whom it may concern -- Know ye that -- GEORGE G. WESCOTT enlisted from Milwaukee, Wis Oct 15, 1864  and was mustered into the U.S. service at Camp Randall, Madison, Oct. 18, 1864 - as a private of Company 12th Regt. Wisconsin Infantry under Capt. J. M. Price and Col. J. K. Prandfit to serve 3 years or during the war.  He was honorably discharged July 16, 1865, at Madison by the reason of the close of the war.  The Regt. was assigned to the 2nd Brig. 1st Div. 17th Corps. Army of Tennessee, and participated in the following engagements:  Hatchie, Miss, Lamar, Hernando, Coldwater, Seige of Vicksburg, Seige of Jackson, Bolton Station, Canton, Miss., Kenesaw Mountain, Ga., Nickajack Creek and Chattahoochie River, Decatur, Ga., Seige of Atlanta, Jonesboro, Lovejoy Sta., March to the Sea, Seige of Savannah, Pocotaglio, Orangeburg, Columbia, Fayetteville, N.C. Goldsboro, N.C., also in Grand Review in Washington, D.C. May 24, 1865.' At the bottom it says 'Presentation' -- This picture bearing the army record of Garner G. Wescott was presented by him July 15, 1897 to his wife Sarah C. to be left to his children William W., George E., Harvey, Fred, Idella, Mary J., Stephen H. and Eugene."

George's granddaughter Idella Edwards Anderson wrote c.1967 that the Discharge was about 22 by 29 inches and was on a cloth backing.

What became of the Discharge Certificate? At the time granddaughter Evelyn wrote this letter to her cousin, she commented that the discharge had been in the possession of Harvey's son Glen Wescott and was left at Schneiders when he moved off the farm; the Schneiders gave it to a family member named Mildred in 1963. One hopes this treasure remains safely in the hands of  someone in the family to this day.

George's 9 months of action would have included:

An excellent Civil War website with more information can be found through this link.


There are also a couple of books that I have ordered that should provide more details about the specifics of the action seen by his unit and of life as a soldier during the War. He is listed in the index of soldiers in "The Marching Twelfth: the Story of the Twelfth Wisconsin Volunteer Infantry Regiment as Told by the Men Who Served in It" edited by Peggy M. Singer, although he is not likely one of the story tellers. A small book written by George's relative Morgan Ebenezer Westcott entitled "Civil War Letters 1861 to 1865" is likely to provide much detail about daily life during the War.


Much more is known about George the soldier than about George the family man and community member. We know he had been both a carpenter and a farmer. I suspect he may have been an early photographer based on the group photographs of his family in which he is consistently missing. A granddaughter Marion Edwards Miller said that the Wescotts were a musical family, playing at local dances, and that George conducted an old-fashioned singing school.

He and Sarah are buried together in Colby Memorial Park, Clark Co., WI.

The name "Garner" is an unusual name. It sounds like an earlier family surname that has been adopted as a middle name. The family did this more than once: George has brothers Barton Wescott and  Carver Wescott, both surnames of female ancestors. Although there were no "Garners" in the Wescott family tree, there certainly were "Gardiners". Hannah Gardiner married Josiah Westcott in 1780; they were George Garner's 4X great grandparents. It has been suggested by my 4th cousin Jack Brown (another Westcott descendant who is a DNA match on chromosomes 5 and 10 for both my mother and me and additionally for my mother on chromosome 9) that "Garner" is used in error and it was really intended to be "Gardiner". Even though all the documents referred to above use "Garner", it could well have been his parents who got it just a wee bit wrong from the time of his birth. After all, given how many ways Westcott/Westcot/Wescott have been spelled just within George's Civil War documentation, leaving out a couple of letters is hardly noteworthy. I think Jack is absolutely right about the source for George's middle name.