In our more enlightened, and, we hope, more compassionate times, we would be unlikely to label anyone by most of those terms. They reflect a time when anyone who didn't fit the norm was labelled and put away out of sight in an institution, often for life. Out of sight, out of mind. A family secret that must be kept at all costs!

Not having found anyone classified as defective, dependent or delinquent in the 1880 American census, I would like to take the opportunity this week to discuss the fate of my great grandmother Jorgena Torkelson. This is the most difficult story I've tackled this year, but she deserves to have her memory honoured and cherished in our time since she was largely forgotten in her own final years.

Jorgena was born in October of 1862 in Wisconsin. Her parents Torkel Jorgenson Heimdahl and Signe Knutsdatter had left Nissedal, Telemark, Norway for America on 4 April 1862 when 34 year-old Signe was 3 months pregnant with Jorgena. One cringes to think of women like Signe crossing the Atlantic Ocean probably suffering from both morning sickness and sea sickness while having to tend to older children's needs. Signe and Torkel brought three children under six years of age along on the journey: Jorgen, Karine and Birgette. Had Jorgena been born in Norway, there would have been an excellent record of her date and place of birth and baptism, but in America for that time, such records are difficult to find - if they exist at all.

Torkel developed tuberculosis and the family moved back to Norway at some time prior to the 1865 Norwegian census which finds them all, Jorgena included, living at Nissedal, Telemark, Norway. Three other children were born prior to Torkel's death in January of 1873 in Lake Mills, Iowa. Widowed Signe married Kittel Aaneson in Iowa in November of that same year. They moved to the Red River Valley by covered wagon with Signe's married daughter Karine and Karine's husband John Daley. There were four covered wagons in the party. Aaneson and his step-son Jorgen drove horses; there were also cows and calves in the caravan. The family settled in Grafton Township, Dakota Territory, five miles east of Mandt.

Jorgena soon met and married Andrew Anderson, son of Scandinavian immigrants Israel Anderson and Johanna Gundersdtr. As with American birth records for this period, attempts to locate their 1879 marriage certificate have met with no success. The couple settled on Andrew's homestead west of Grafton where Andrew was active in community affairs, being the county assessor for several years and serving on the local school board. Andrew played the violin, often providing music for local dances and gatherings. He spoke English well, but Jorgena preferred Norwegian.

Children arrived with great regularity: Josephine 1880, Carl 1882, Ida 1884, Cora 1886, Annetta 1888, Clarence 1890, my grandfather Ingwald early 1893 and Arnold 1894. Baby Arnold died within his first year. After a lapse of almost 10 years, baby Gladys was born in 1903 when Jorgena was 41 years old. It will probably never be known what demon gripped Jorgena: was it serious postpartum depression -- or perhaps a recognized mental illness like schizophrenia -- or simply physical and emotional exhaustion? It was all a well-kept secret.


The family story was that Jorgena died in 1904, but my Uncle Bob suspected that she hadn't died at that time but had been institutionalized. He thought it odd that husband Andrew, supposedly a widower in 1904, had not remarried until about 1919, a lengthy period unusual for those times.

A census record confirmed Uncle Bob's suspicions.The South Dakota State Census for 1905 has Jorgene Anderson, age 43, occupation farmer's wife, enumerated in the Yankton South Dakota Hospital for the Insane. She died there in 1912 at the age of just 50 and is buried there in the Rest View cemetery  originally in grave #249 (sadly, no names were put on the stones, simply their patient numbers).  [See Addenda at end of this story for new information obtained by 28 November 2015 and again in August of 2017.]

Details of her life as an inmate are also lacking. Probably she would have been involuntarily committed by husband Andrew, perhaps because of violent or suicidal tendencies. At the time, improvements to public mental facilities had been made since the notorious days of Bedlam and similar madhouses in the 1800's, but conditions were often less than ideal. The facility at Yankton had the good fortune to be under the direction of the progressive Dr. Leonard Mead who believed that successful treatment included surrounding patients with beautiful surroundings, kind treatment and a sense of purpose through useful work. The facility had a fully-functioning farm for the patients to work on. The stencils used as decoration throughout the building were all done by the patients. However, we simply don't know what Jorgena's life was like for the 8 years that she was incarcerated. Did she yearn for her freedom or was she happy to have the responsibilities of housekeeping and life on the frontier removed from her shoulders? Did she understand what was going on? Did anyone in the family ever go to visit her? We can only guess at her emotional state.

Nor is it known how Andrew coped with caring for his youngest children without a wife. Probably the oldest daughters were called upon to assist, especially with baby Gladys. My grandfather Ingwald was the next youngest at 12. A year after his mother's departure, Ingwald met a near-fatal accident when a friend's shotgun accidentally discharged, catching him full blast in the left shoulder just above the lung. He almost bled to death before a doctor reached him and he lay close to death for many days after. The left arm and hand were to remain permanently stunted and he still suffered neck and shoulder pain some fifty years later. X-rays revealed many shotgun pellets lodged in bone, muscle and skin in his shoulder and neck. This did, however, excuse him from participating in the First World War: when he went to enlist and was examined by a doctor, he was turned away on the basis that "he looked like he'd already been through the war!" Whether the accident would have been avoided had his mother still been at home is a moot point, but no doubt the whole family suffered her absence.

Andrew packed up his family and moved to South Dakota in 1906. He bought a ranch in the area where oldest daughter Jessie and her husband Andrew were ranching and where Andrew's daughter Cora was teaching school. They were 90 miles from a railroad, and once a year all supplies were hauled in by team and wagon. On the ranch, Andrew's family lived in a sod house, finished inside and having a board floor.

Jorgena's accommodations were outwardly much more elegant. The buildings of the mental institution at Yankton are now a National Historic Site and were obviously once beautiful with marble, tiles, and classical stairways and columns, in stark contrast to their utilitarian purpose. They are now hauntingly derelict. Some wonderful images, including two of the cemetery where Jorgena is buried, can be found through this link. [2017 update: Our visit to the facility in August 2017 enabled us to see the new headstone for Jorgena in the cemetery (see images at bottom of this story). We were surprised and delighted to be offered the opportunity to visit the inside of the building in which Jorgena would have lived her last years. Far from being demolished as we had feared, the building is now being restored to its original glory for use as museum and event center. The following images show the state of things as we found them on 18 August 2017: 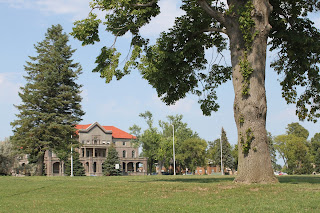 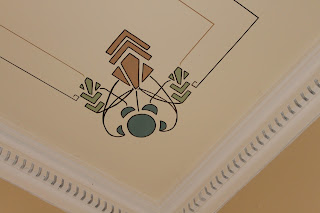 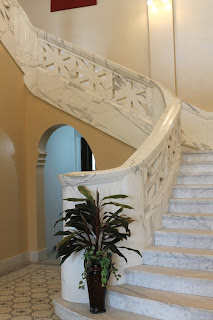 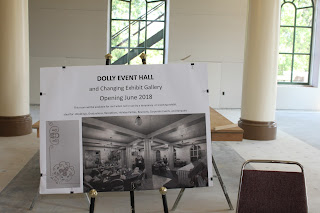 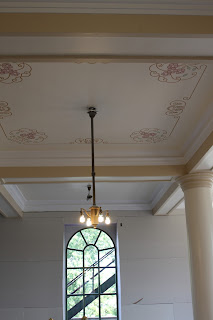 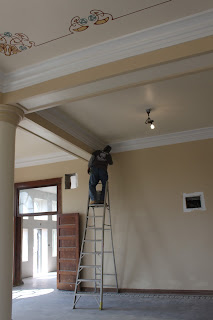 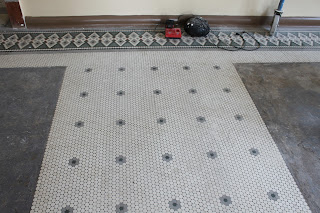 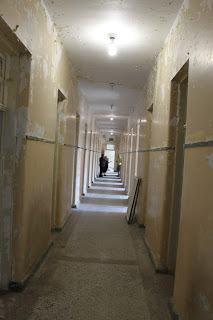 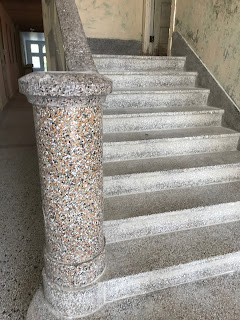 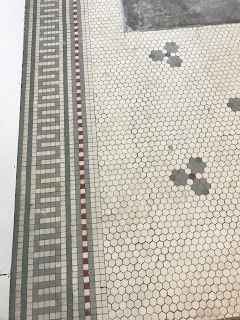 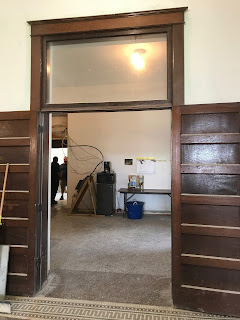 It saddens me greatly to think of this forgotten woman who obviously led a challenging and unhappy life. As one of her numerous descendants, I am glad that some of the truth about the final years of her life is coming to light so that she does not remain hidden away behind locked doors of secrecy and shame. No longer out of sight and out of mind, may you rest in peace, Jorgena.

Since posting Jorgena's story, I have been able to obtain a copy of her death certificate. She died 4 June 1912 of exhaustion of chronic melancholia. My brother and sister-in-law recently stopped at Yankton and were directed to Jorgena's tombstone (using a cross-referenced numbering system). They were able to take the following photographs of her burial location. 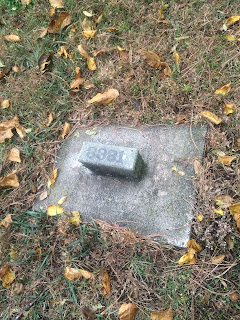 Descendants of Jorgena's have recently had her numbered stone replaced with one with her name (with her first name spelled the usual Norwegian way). Unfortunately, without ever being able to find a specific birth date for her, we were only able to use the years of her birth and death on the stone. We hope she now truly rests at peace on this beautiful grassy tree-lined hill. 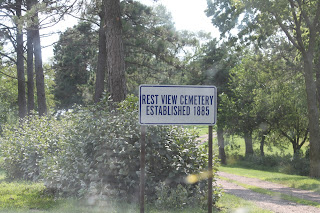 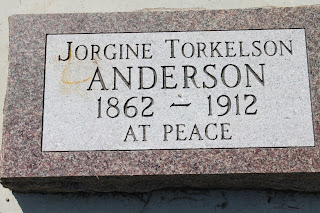 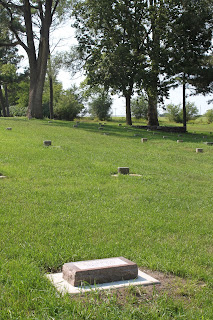 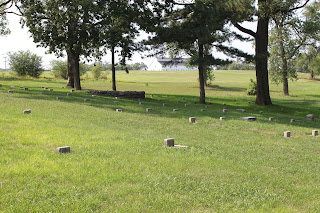 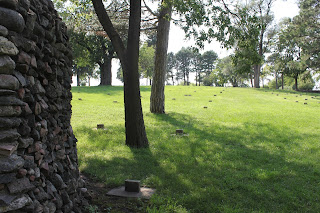