Amy Johnson Crow's suggested theme for this week of "School Days" relates to the time of year of this post: "Many kids have returned to school by this time. What do you know about your ancestors' school days? Do you have any yearbooks? Have you found him or her in a local school census?"

The only family member for whom I have yearbooks is my grandmother Idella Edwards, but since I have already written about her in an earlier post, I was a bit stymied as to how to deal with this week's theme. Then it came to me: what better time to write the story of my Uncle Bob? I have always loved his oh-so-serious university graduation photograph. I remember as a child that the family was very proud of his achievement in graduating from university after having served in the Second World War.

Uncle Bob and I shared a love of poetry; he lent me his huge stack of books of poetry for a prolonged period when I was a teenager. Uncle Bob and I also shared a passion for family history. In fact, Uncle Bob is the one who got me started with this obsession. So this week, here's to you, Uncle Bob!

Bob was the oldest of the six children born to my maternal grandparents Ingwald Anderson and Idella Edwards. Born 27 December 1920, he was one of many Andersons to add his birthday to future Christmas and New Year's Celebrations.

As an aside, while looking through materials to prepare this story, I did come across this wonderful and educationally-relevant photograph of a business school class presumably somewhere in the Dakotas from 1909 where my grandfather Ingwald was 17 years old. He is in the center of the back row with the arrow pointing to him. Perhaps the "ACC" in the background will enable someone to provide more details about this group. That same year, he homesteaded in Canada and was a farmer for the rest of his life. 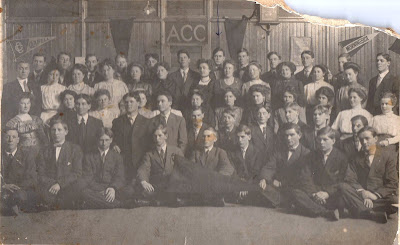 Back to Bob - his childhood was spent on the family farm in the Lancer/Abbey area of southwestern Saskatchewan. Times were tough, but the Anderson children always seemed to have good times together and fond memories of their adventures.


Bob's mother Idella Edwards had been a school teacher for whom education was very important. Bob went to Ararat Springs School in the Lancer/Abbey area of Saskatchewan, a typical one-room schoolhouse common on the Canadian prairies at the time. Grades 1 to 8 were all taught by one teacher. Grades 9 and 10 could be completed at the school by Correspondence, but students wishing to complete the last two years of high school had to be inventive to find ways to live in a city or town that had a high school. My mother, for example, was essentially housekeeper and babysitter in exchange for her board while attending Grades 11 and 12 in Swift Current, Saskatchewan. There were no frills, no optional classes and certainly no year books or professional school photographs in these little country schools. Surprisingly, perhaps, most children obtained a good basic education in schools such as Ararat Springs and never felt that their education was lacking. Bob was, I'm sure, an excellent student who developed a love of history, science, music, poetry and literature that made him an interesting and well-informed person throughout his life.

In later years, Bob wrote a lot of memoirs that were published in "Western People". One story described the Christmas concert (called "Christmas Tree") held at Ararat Springs School at 7 o'clock on Christmas Day 1919, which would have been one year before Bob was born but these school Christmas concerts followed a similar pattern for decades. Weeks were spent memorizing and preparing songs, lines and drills. Parents helped by making costumes and a raised stage complete with stage curtains (often borrowed from some home's window!). Red and green crepe paper streamers were hung and a Christmas tree put up. Invitations were issued in advance and an admission price of 50 cents was charged (25 cents for children). Supplies including French creams and candles, sugar and coffee were all ordered from the Eatons' mail-order catalogue. Presents were also ordered from the catalogue for all 52 students. (Yes, there were 52 students in that one room schoolhouse that year, and we think today's classes are overcrowded!) Older girls were to receive an apron or embroidery; younger ones a ribbon, collar, beads, brooch or note paper and very young ones a doll. Older boys were to get a tie, belt or jack knife; the younger ones a comb, pencil set or pencil box and the very little boys a toy top. After the program was over and all the gifts distributed by Santa Claus, the seats were pushed to the walls and a fiddler tuned up. Wax was sprinkled on the wood floor, the piano joined in and then the dance began. Coffee, sandwiches and cake were served, but by then, many of the children were asleep on the desks. The celebrations ended after midnight, then the teams of horses were hooked to rigs, Model T's and A's were warmed up, sleepy children bundled aboard and the crowd dispersed. Quite a Christmas night!


He also described how he and sister Kathryn built a perfect snowman in the middle of the road on their walk home from school. Unfortunately for them, their widowed teacher Mrs. Gardiner, nearing retirement age, small and frail, had mistaken the shape of the snowman for her two hounds. It turned out she had made the long walk down the road to investigate, causing her asthma to worsen. Bob was given 200 lines to write and Kathryn 100: "I will not loiter on my way home from school." They had to open the school dictionary to find out how to spell "loiter", but he commented that "we did not have to read on to learn its meaning."


Bob completed Grade 10 at the little country school of Ararat Springs in June of 1937. The 1930's had been the "Dirty 30's" on the Canadian prairies and the Andersons had suffered badly as had thousands of other families during the drought and depression. There was a complete crop failure that year, so with no local work to be had and no further schooling in the cards for him at that time, at the age of 16 he took the train hundreds of miles across Canada to find work in Southern Ontario. Although jobs were scarce, he was able to find work on a tobacco farm that paid the princely sum of $20 per month plus board.

He stayed in Ontario for a year before returning home and said he was very fortunate to land a plum job as a labourer at the Agricultural Research Station at Swift Current, Saskatchewan for $65 per month. He worked there until he enlisted in the Canadian Army in the spring of 1941. He never did get overseas but was promoted to Lieutenant and served in both Canada and the USA. At War's end in 1945, he was at Fort Benning, Georgia, training as part of the Canadian Pacific Division.

Now in his mid 20's, Bob finally completed high school in 1946. He then moved north to Saskatoon where he obtained his B. Sc. (Agriculture) at the University of Saskatchewan. During his undergraduate summers and for two post-graduate years, he continued to work at the Research Station in Swift Current.

Bob was always a good big brother to his siblings. Although not well off himself at the time, he managed to lend his sister Elinor enough money to enable her to become qualified as a teacher. She laughs when she recalls that it took all her meager earnings as an underpaid teacher in another of Saskatchewan's one-room school houses to repay him before she got married and stopped teaching.

In the early 1950's he was research assistant for Saskatchewan's Royal Commission on Agriculture and Rural Life. By 1954 he bought some land near his parents' farm and began farming the next year. After his father's death in 1958, he took over the home farm and, with wife Yvonne, farmed there until the mid 1980's and raised son Blair who now operates the farm.


One of the projects that Bob undertook during his quiet winter months as a grain farmer was to compile a family tree for the family. When he did this in the 1970's, it meant painstaking letter writing. This was long before the days of home computers and internet searches. He prepared all the family trees by hand. An example of just one page of Bob's work is set out below.


It is Bob's record of our earliest known ancestors in America, Samuel Bullen and Mary Morse, that set me off on the genealogy trail when computer research became available some 20 years after Bob prepared this tree. Whenever I made a discovery, I loved to share it with him. For our family reunion in the year 2000, Uncle Bob and I jointly wrote and self-published a family history book for the family called "Roots and Branches" compiling all of our combined discoveries. We had so much fun discussing the project, even though, as you can see in the photograph below, we tended to get ostracized at family gatherings such as this one at the Lancer Chokecherry Festival. I've always loved this photograph of the two of us because it reminds me of the passion that we shared for our family history.

Never one for big celebrations, when he turned 80 the family had to use a bit of subterfuge to get him to his surprise party. Trying to think of what would entice him out for the evening, the family invented a special imaginary showing of a film about the Galapagos Islands. That did the trick! However, I've never been sure that he wasn't disappointed to discover that the outing was only a party for him rather than a much more interesting film about the Galapagos!

"I'm at peace with the world.
No more races to be run.
Friends and family light the days,
And glad I'll go when night has come."
(Poem by R.W. Anderson)